At the food bank in Ishpeming, 14 miles west of Marquette in Michigan’s Upper Peninsula, the coffee comes with a disclaimer.

“We don’t have lattes,” says volunteer Dean Harvey. “We have black coffee you could stand a spoon up in. This is the UP.”

Truck driver Jim Bess hunts bears with a pack of bluetick hounds he trains himself; manager Dave Mason used to sled down the roof of the Superior Dome at Northern Michigan University when he was a student; and the branch shares a building with a flower shop and the local ABC affiliate. Being in the UP, they also face a set of challenges distinctly different from those faced by our branches below the bridge. The winters are brutal, social service agencies are few and far between, and fresh fruits and vegetables can be hard to come by.

“You have to go so far in any direction,” said a middle-aged woman named Donna, sitting in the basement of Faith Lutheran Church as other clients filled their boxes with cereal and dry rice. “They can’t do it. It’s $25 in gas to go into town.”

For the 1,100 residents of Rock, “town” is the city of Escanaba, 28 miles south, where the nearest fully stocked grocery store is located. The only food retailer in Rock is a one-stop, which stocks very little produce.

Rock and much of Delta County is considered a food desert by the USDA. Incomes are low, and finding proper nutrition is a challenge. Even in more densely populated areas, low wages make it difficult to keep the refrigerator full. 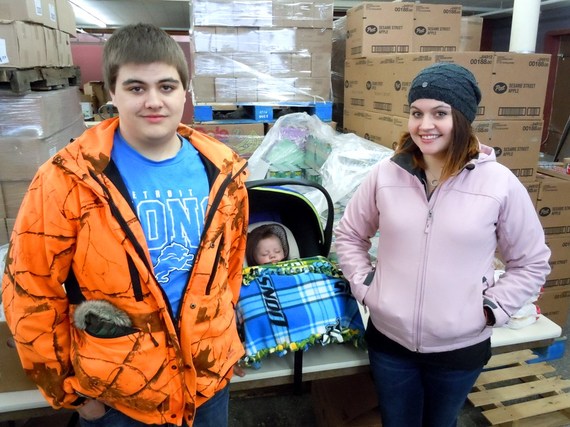 In Marquette County, 18 percent of the population is living in poverty, even though the county’s unemployment rate is one of the lowest in the state. Brittany Carlson and her boyfriend both work at a local department store in the area, but since the birth of their first child, Tanner, they’ve had trouble paying the bills.

So Brittany’s brother Cole brought her to the Ishpeming branch in early April to pick up some food. Brittany had just started going back to work.

“They would only pay for eight weeks after Caesarian,” she said. “It was hard.”

“We make probably just a smidge over the line where we’d be able to get food stamps,” she said, and although she receives some infant-care items through WIC, her young family is just scraping by. “It’s terrible. It really is. You spend $130 on groceries, and it never seems to last enough.”

The fact is that food insecurity shouldn’t exist in the state of Michigan. Michigan is second only to California in agricultural diversity and it leads the country in the cultivation of 11 different crops, including tart cherries and blueberries. 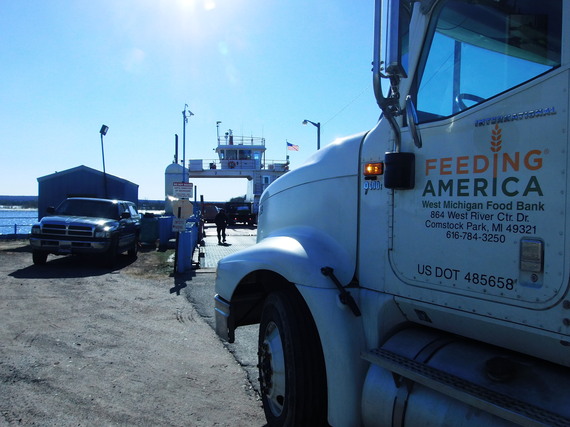 In the last year alone, Feeding America West Michigan’s inventory of fresh produce grew by more than half a million pounds. Last year, we delivered Mobile Food Pantries to the region for the first time, bringing fruits, vegetables, milk, yogurt and baked goods to communities from Sugar Island to Escanaba.

At our branches in Ishpeming and Sault Ste. Marie, food distribution increased 25 percent to 1.3 million pounds. In fact, our organization received more food in 2013 than any other year, and we know there’s more to be found.

In the U.S., we have more than enough food to support everyone. In fact, we waste up to 40 percent of our food every year. Food banks like ours are equipped to save surplus food before it ends up in the landfill, but since the recession, our network has been stretched to capacity by the growing need, while at the same time, our partners in the public sphere have been making cuts to federal hunger-relief programs that support our work.

Now is the time to take action. The need is great, and the solution is within reach.

To join the fight against hunger, get connected with your local food bank. With your help, we can make sure that good food — and strong coffee — are available to our neighbors in need in the Upper Peninsula and across the country.

Related Topics:
Up Next

One in Six Americans Face Hunger, And It’s Happening Right In Your Hometown

5 lessons on social distancing from the 1918 Spanish flu pandemic

Stimulus payments: Key dates if you didn’t get a check yet; IRS updates check my status app, and more